The following are the results of my analysis of the data from the Mozilla Open Data Visualization Fall 2010 contest. I downloaded witl_small.tar.gz (from "A Week in the Life of a Browser - Version 2" ) which contains a sample of the data for my analysis.

I did not download the full set as my bandwidth has been crappy for sometime and also was running out of time. (The queries can be run on the FULL data though.) Mozilla has provided many attributes related to the various activities on FF (and there are SO MANY of them!). Since i stumbled on this contest pretty late in the game, i was unable to analyse ALL the attributes/dimensions. I preferred tackling a few questions in good detail than analysing many dimensions without much depth.

So my analysis consists of the following 4 visualizations which try to answer 4 different questions.

1) What is the Web usage pattern of people of different age groups?
Or in other words, What is the average number of hours spent by someone who is 30 years old? 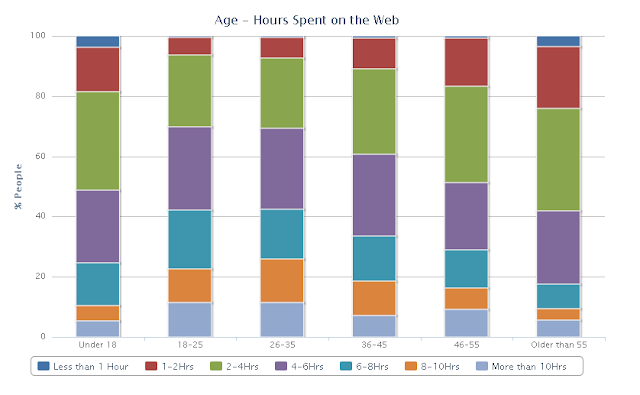 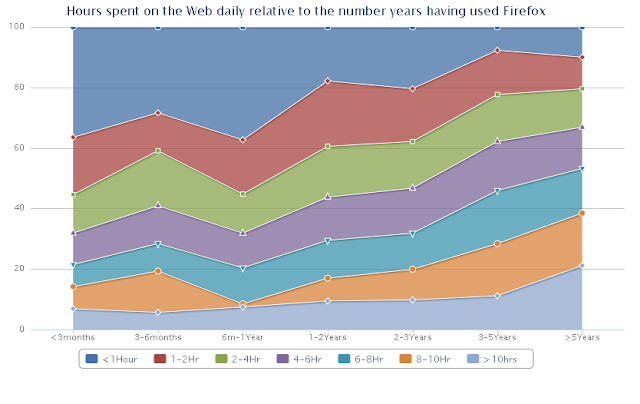 3) What kind of bookmark activity do people do who are associated with Firefox for a number of years(we analyse *only* those who use any of the bookmark feature)
i.e, how is the bookmarking creation/choosing/modifying spread among the bookmarking operations? 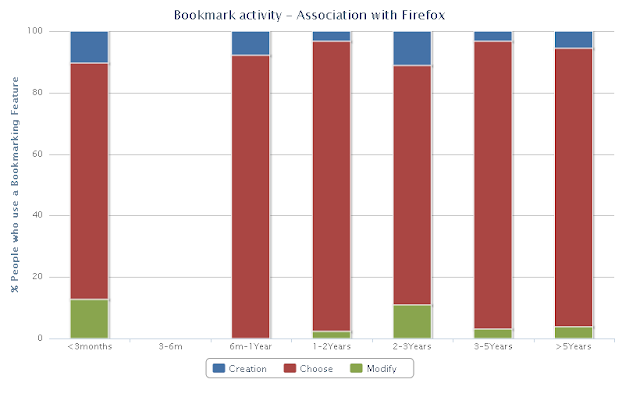 (In the above chart, you will find 3-6m column being empty - the reason being, there was no data for this in the sample - i hope that the same is present in the full data set).

[I have deliberately avoided explaining the interpretations and understandings - as I believe that the numbers speak for themselves. However, any doubts in the charts can be explained]

Email ThisBlogThis!Share to TwitterShare to FacebookShare to Pinterest
Labels: visualization

Thanks for your interesting article.

That would make the baseline of the chart pretty long. As of now, since this is a blog, i have just pasted the image of the chart; i have a webapp which i need to host in GAE sometime - that would give you a better 'feel' of the chart, with the hover tips etc.

I hope the webapp is not of high priority; am working on a few more viz cases that i will putting in my next blog.